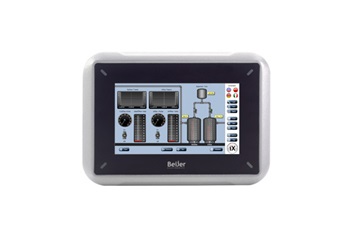 Can be used with following systems:

This document explains how to setup ethernet connection with programmable I/O (PIO).

Attached project show how to delete all files in the catalogues where the datalogs are exported when using the action "export to CSV".
The exaple covers bothe internal filesystem, and USB.

This document explains how too set up transparent and passthrough mode in iX Developer 2.0.

Buzzer in TxA series:
There is a buzzer in TxA terminals.
It is similar in style to that of the E1000 buzzer but you need to script to make the buzzer work in IX.
The attaced sample shows how to control frequency an duration of the sound.

One miner drawback is that you HAVE to input a duration, which means it's not possible to make a sound, as long as a signal is on.

There is no way to control the volume of the sound, the built-in buzzer runs at a fixed volume.
There is however a frequency at which the buzzer is as loud as possible, that is at 2738,4 Hz.
If you want a variable frequency range, the buzzer is loudest between approx. 2500 - 3500 Hz

Buzzer in TxB series:
Works in same way as TxA.

Note, the FX3U-ENET module has a limitation of maximum 4 MC connections.

​This document explains how to set up a Programmable I/O (Crevis NA-9372) connection with iX Developer 2.20 with CODESYS ARTI Driver.

TxA panel T4A, T7A, T10A batteries, do they need to be replaced?

TxA panel T4A, T7A, T10A batteries, do they need to be replaced?

No, the batteries for the real-time-clock inside TxA panels are all rechargable.
The panel needs to be powered up for a while in order to charge the battery, but after that the panel retains time and date information.
If you leave the panel without power for a prolonged time, the rechargable battery will run out and the panel will loose the time and date.

You find this information in driverhelp!

Web browser is not included in the microsoft CE 6.0 core licence used in the TxA terminals.
The tool is blocked in IX developer obviously.

It is neighter possible to start a browser  from a "RUN" action, since it is not included in the Terminals OS \ image

That option is no longer availible, due software related resons.

The Modbus master driver (V5.xx.xx) does not have any support for forcing the RTS signal high (cmd line option XRTS).

It´s possible to use the Modbus/TCP-driver in iX if a Westermo EDW-100 is connected to the Pluto. The standard Pluto RS232-cable is directly connected to the EDW-100 serial port, see picture.

The configuration of the EDW-100 is in the attached in the file edw100.ini (just change the IP to something that matches your network).

An example project for iX (made in version 2.10) is attached in the file Pluto_iX.zip (made for a T7A), the variables used in the example are based on the example Pluto PLC-project Pluto_PLCcode.sps.
Also tested and working with X2 pro panel and iX 2.20 SP2.

Workaround 2:
17-04-04: Note! We have seen issues with this setup depening on the Pluto and panel modell.
Problem initiating the communication on startup/reboot.
We highly recommend workaround 1.​

It´s possible to get this to work if a Westermo MDW-45 is connected between TxA/TxB/TxC and the Pluto.

Switches that should be set to ON on the MDW-45:

Serial/IP was set up as follows:

If the firewall do not allow Total Commander to connect to the FTP Server on a operator panel you can try  "Use passive mode for transfers (like a WWW browser)".

This information scope is

Fonts that are preinstalled

iX - Is it possible to send SMS when alarms are triggerd

The built in SMS service are using a Web SMS service. That means the panel must be connected to internet, and exchange it's alarms through a web service.

You cannot directly connect a Westermo GDW-11 to send SMS with a built in function. That has to be scripted.

iX - How to enter update mode for system software upgrade

iX - How to enter the Service Menu to set a new IP address, calibrate touch etc

Overview of all batteries in TxX panels

Solution for this perticular costumer was to enter the MRD's local IP into iX panels gateway address.

The battery that you can find in our TxA panels is a rechargeable battery and needs to be charged for 2 days to be fully charged. This is important to do from time to time especially if the unit is used from time to time. It is hard to keep track when the battery level is going low so power the unit ON and keep tack of when the unit was charged the last time.

After the unit has been charged (powered ON) for 2 days the unit can be left without power for one month before it needs to be charged again. This only applies if the room temperature where the unit is kept does not exceed 25 degrees Celsius.

How to check what battery type your TxA is equipeed with

Part number that ends with 01 is equipped with a rechargeable battery.

Part number that ends with 02 is equipped with a non rechargeable battery.

When connecing a TxA or TxB panel using a CAB107 + CAB18 or CAB107+MAC30/40-CAB, make sure to use COM4 on the panel, COM4 is the only RS422-port with RTS-signals. The RTS-signals are needed to be able to communicate with A-Series CPU:s.

If only the COM1 RS232-port is availible on the panel, you need a signal converter like the SC-09 programming cable (with a CAB108 male-male gender changer), a MDW45 or the JetCon-2201.

If you want to connect a TxC panel to an A-Series CPU , you MUST use COM1 with a signal converter, as the TxC doesn't have any RS422-ports.

If you need to build a complete cable from a panel to the PLC, a mashup of CAB107+CAB18 can be seen below:

TxA / TxB - MAC-CAB adaptor for use with old cabling

The schemacit belows shows an example of how an adaptor to connect a TxA or TxB panel to an older MAC-CAB cable originally made for a MAC50/90.

Please note that the driver only works when using COM2 to communicate.

TxA-/TxB-Softcontroller: Fractions of seconds are not possible to read. The blocks used are avaliable, but the RTC does not return the last 3 digits for fractions of a second.

Nexto: Yes, requires functions blocks to read. See related links for which function blocks to use.

The document declares technical information of which USB memory we support for our TxA panels.

​Guidelines for TxA and TxB migration to X2.

​​Guidelines for TxA and TxB migration to X2. 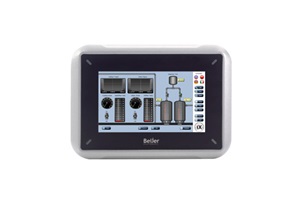