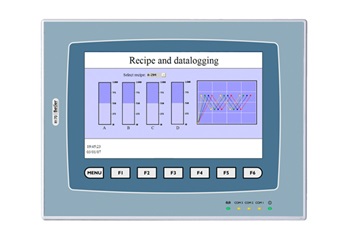 The H-T60 operator terminals of hardware revision 1 are equipped with a rechargeable battery. This document contains important information such as indication of when the battery needs to be charged, how to prevent loss of recipe data, etc.

The driver file attached needs to be copied to the Driver folder of H-Designer to update .

The H-T40m-P operator panel can be equipped with the HMI I/O Controller, an expansion I/O module aimed at providing smaller system applications with simple I/O control interface without the need for a PLC. The compact expansion module is easy to install and fits seamlessly on the back of the operator panel.  This manual describes the installation and operation of the HMI I/O Controller.

Cable drawings for most of the drivers are available in the reference manual (chapter 9) for the H-series/PWS.

Operation & Installation manuals of PWS series, available in both English and Traditional Chinese.

Installation and operation manual for H-T40m.

H-T40m-P can be equipped with the HMI I/O Controller, an expansion I/O module aimed at providing smaller system applications with simple I/O control interface without the need for a PLC. The compact expansion module is easy to install and fits seamlessly on the back of the operator panel.

Reference manual for the configuration tool H-Designer for the H-series. MAEN822B: English manual

Downloading a Project to an LHT series Operator Panel (SUEN276)

This document describes how to download an H-Designer project to an LHT-series operator panel via a serial connection, Ethernet or USB.

It is possible to download projects to an H-series panel via Ethernet, serial cable, USB cable or from a USB memory. This documents describes the different procedures in order for you to choose what suits you best.

This document describes how to connect the RS485 interface on the H-series operator terminals to Siemens S7-200 CPU using the PPI protocol.

The document describes how to use the new USB functions in the latest H-Designer release.

This document describes how to connect the RS485 interface on the H-series operator terminals to Siemens S7-200 CPU using the PPI protocol.

Cable between the H-series and Alpha2

Mitsubishi's cable (AL2-GSM-CAB) in combination with

You need to connect these two cables together to communicate between the H-series and Mitsubishi Alpha2.

There is no built-in dataexchange-function for the H-series but you can use macros to create a dataexchange. The macro-instructions BMOV/MOV moves data from one device to another, if you want to move data from one driver to another you can use the following syntax:
1/D0 = 2/W0
BMOV(1/D0, 2/W0, 10)
1/ and 2/ means which driver that you are addressing (compare to @1 and @2 in Cimrex/Exter series).

Collect data from a H-terminal?

Limitations for Macro in H-series

For Macro in CP400 Soft, the amount limitation is dependant upon folowing elements:

After compiling of project, the total size including Macro can not exceed HMI's memory size.

Download an application to an H-terminal using a modem connection?

At this moment LonWorks support only exists for PWS-terminals. The terminals are called AP1600 Color/Mono (and are PWS6600/HT60 with a modified firmware).

At the moment there are no plans on implementing an AB CLX driver for H-series. In most cases it's not interresting connecting a low-price HMI to a high-end/expensive PLC-system.
It's possible to connect a H-Terminal to an AB CLX by using the serial DF1-driver.

Picture below describes a communication cable between a H-terminal and a SLC500/3. This information can also be found in the H-Designer manual (chapter 9).

How many multi-link slaves can be connected to one master?

It's possible to connect up to 7 Multi-link slaves to 1 master (over either RS485 or Ethernet)
Note!
For H-series, we have two ways of linking terminals and PLC together, one is Multi-link the other is Cross-link.

For Multi-link,
the meaning is 1 Master terminal connect to PLC, then all other terminals act as slave without connect to PLC and receive data from Master terminal. Theoretically there is no limitation on the number of slaves connected to the network.  However, in real practice, speed of data transfer will be affected by many different things, such as distance, cable used... etc.

If you are using COM port as link between each terminal, of course it will be much slower than using Ethernet.

We have many customers using Multi-link function, and from experience, the best performance is when 2 slaves on network, or if more than 7 slaves the refresh rate of data will be much slower.


For Cross-link,
the meaning is each terminal connects to own PLC, and through network all terminals can exchange data between each PLCs.

The performance in Cross-link is better than Multi-link.

At the moment there are no plans on implementing web browser support for H-series.

Q: We are experiencing difficulty with printing to a HP printer using the HP PCL Laserjet driver in H-Designer. Can you supply further information on the printers required ie PCL 3 or 5 type printers?

A: H-designer, B167, will handle both standards. This build support PCL3 and PCL 5 HP-printers however, H-designer does not include drivers for all HP-models. Recommended printers are: HP Laserjet 2700 series, HP officejet 5000 series and HP Photosmart series.

H-Series terminals have capability to send and receive serial communication data outside of the terminals dedicated controller system communications.
This ability has different applications and works in specific ways using specific settings and programming.
1. The terminal can display a Terminal Window Object in graphic screens. This terminal window can display received data in ASCII or Hex formats.
You can send ASCII characters from the terminal with the Set Value Button Tool - in ASCII mode. The limitation here is that you will only send printable characters - there is no way to send control characters, ex. Carriage Return+Line Feed.
To use these functions the Controller / PLC Selection in Workstation Setup should be set to ASCII Device. The Connection configuration determines the physical port and parameters to use.
In the Terminal Window object the Read Variable should be set to RX (receive).
In the Set Value Button Tool the Write Variable should be set to TX (transmit). Set Value should be set to Character String. Enter the characters you want to transmit directly in to the Set Value text box. Then when this object is activated (touched) these characters will be sent.
2. Computer protocol Master and Slave capability.
With this functionality the terminal will in Slave Mode (Computer as Master) respond to commands from a master to read and write internal variable data. This is a defined protocol using ASCII characters. The protocol is available upon request from Beijer Electronics.
With this functionality the terminal as a Master (Computer as Slave) will poll a slave device using this same ASCII protocol.
When using this function the terminal allocates internal memory to act as a slave device. The memory addresses W0 - W2047 for word devices, and B0 - B1023 for bit devices are used. In Master mode these same addresses are use has the valid device types and the terminal will generate the corresponding ASCII commands to the slave device.
3. Use Macro or Ladder instructions to send and receive data.
4. H-Series terminals offer Modbus ASCII Slave and Modbus ASCII Master communication drivers. Using this ASCII communication version of modbus would be similar to using the Computer Protocol as described. But in this case the Modbus Protocol is used. The terminal reveals its internal memory as Modbus aware addresses.

Please check that the DIP switches for communication parameters and for the com port are right, SW5 and SW10. Refer to the attached document.

CF and USB models for the H-series

Cables : Where find communication cable drawings for the H-series

The drawings for most of the drivers are available in the reference manual (chapter 9) for the H-series.

The touch screen is calibrated in the System menu (press F4/Set -> Touch Panel).

Examples of ladder logic in H-Series

In the attached application you can find a small ladder-example (just some arithmetic operations).

PWS 920 is a very old operator terminal, the programming software is DOS-based.

The H-series 9 pin to 9 pin download cable, will work for this application.

In the Cimrex/Exter driver it's possible to select if you want to use either CRC or BCC checksum. This option is not available for the H-series driver, it uses BCC!

The Q00-supports a special protocol called "Serial", and the Q00(CPU) driver is implemented based on this protocol and not the normal QCPU-protocol. The necessary steps are as follows:
- Create a new application in GX IEC Developer/GX Developer (Q00-CPU).
- Open the PLC parameter dialog (from the Project manager).
- Click on the tab called Serial.
- Enable Serial communication.
- Download the PLC-application and either reset or cycle the power of the PLC.
The Q00J-CPU does not support the serial communication protocol. The only solution available today is to use a C24-module and use the QnA-link driver instead.

A document describing settings in TwinCat to allow communications between an H Series network capable HMI and a Beckhoff CX1000 series controller.

DH485 and DH+ is two different protocols/network standards. DH+ is a faster network than DH485 and we only support DH485. DH+ requires external hardware and that's why we have not implemented a driver. I know that there are converters available on the market (DF1 to DH+) but we have not tested any of these converters ourselves (you can find one of many examples on the web-site http://www.protocolconverter.com/products/dl3500dh+df1.htm). We have a DF1-driver available so it should be possible connecting yourselves to a DH+ network using a converter.

In FPWIN the station address of the PLC is setup in the Tool Port dialog:
The Tool port unit number is set to 1 therefore the HMI will have to use the following communication setup:

A document that explains the "Computer as Master"-protocol is attached to this knowledge.

To communication to the Eurotherm system Mini 8 you must change the default setting for the IP_address_2 from Strict(0) to Instr(2).

What is the syntax for bit addressing of protocoll OMRON CJ1M ?

If you want to connect a H-terminal to a Siemens S7-300 over MPI then the terminal's MPI address must be lower than the PLC's MPI address.

The TSX Micro driver communicates with the PLC using Modbus.

I've attached a PLC- and HMI-application. Make sure that the terminal have a MPI-address that is less than the PLC's MPI-address. You can find cable descriptions etc in the H-Designer manual (Chapter 9):
http://hmi.beijerelectronics.com/web/webbfiles.nsf/0/E9633CF23DC8820DC1 2570B50028DDEE?opendocument&LANG=ENG
- The parity setting should be EVEN
I also recommend that you download the latest released version of H-Designer from our website:
http://hmi.beijerelectronics.com/web/webbfiles.nsf/0/18A16958F16D074 9C125706E003A4EDC?opendocument&LANG=ENG

Problem:
What kind of backlight is used in the H-series?

Solution:
- H-K30m uses LED backlight which will last for approximately 20 years.
- H-T50 has a separate backlight - part number: 650093+A3
- H-T60, T70, T80, T100, the LCD model is a compact module with backlight inside. If the backlight is damaged then you will need to change the complete display.

If an application should be converted from an older PWS terminal to new model, the application file, with the file extension .v3f, is necessary. The source can be uploaded from the terminal if a "download source" was previously made. If the source was not downloaded to the terminal it will not be possible to upload and convert the project.

H-series - Is the internal memory volatile?

​ADP for X2 base ADP

All brands of PWS,

The document includes the following products: 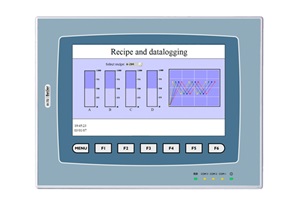